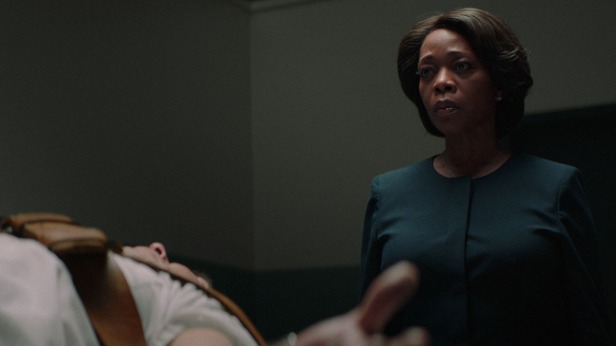 From the blood-freezing opening, it’s not hard to see why Clemency won the top prize at the 2019 Sundance Film Festival. A clear-eyed, unfussy look at the grimly banal, yet utterly barbaric, process of a state-sanctioned execution, it’s a heavy statement of intent that Chinonye Chuwku’s film more than has the capability of fulfilling, a devastating drama about America’s legal ills that would be very difficult to follow. It’s the kind of film that takes a while to heave off your shoulders after the credits roll and you leave the cinema, haunting and infuriating in equal measure, its rage backed up by assured filmmaking and supreme performances.

After the aforementioned execution is botched, the psyche of the prison warden overseeing it, Bernadine Williams (Alfre Woodard), starts to crack, especially as she has another killing, of possibly wrongly convicted cop killer Anthony Woods (Aldis Hodge), in the imminent future. Wisely, Chukwu doesn’t demand too much of our sympathy for Bernadine – in fact actively condemning her in the striking final shot. Instead, she does an amazing job of placing us deep within Bernadine’s world, and we catch some of the debilitating spiritual sicknesses that come with it without having to root for Bernadine as any kind of protagonist.

Chukwu creates an incredibly oppressive atmosphere, both in and out of the prison. Though the dialogue can be a little blunt at times, Clemency does all its best work with silence and empty space. Gut-deep unpleasantness lingers in every environment, especially in the farcical attempts to make the executions seem more ‘civilised’. No one we see in the film actually wants Woods to die, but the hideous, blood-soaked wheels of American Justice are already in motion, and the possibility of clemency from the state governor becomes slimmer and slimmer as the story progresses.

Woodard makes a fantastic graduation to lead actor after a career spent mostly in supporting roles, captivating without being melodramatic or obviously showy, giving Bernadine a mix of stoicism, sadness, emotional stunting, and regret that makes for a fascinating lead. Hodge is just as good as Woods; his unadulterated fear when prison officials clinically describe exactly how he’s going to die is raw and profoundly sad. His occasional lapses into hope, no matter how brief, are wrenching, and Clemency makes sure to grant him and his supporters, be they protestors or his lawyers, a dignity that the reality of his situation is determined to strip from him.

Wendell Pierce also offers able support as Bernadine’s husband, who is desperate for his wife to retire, allowing her to reopen herself to real feeling. A lesser film might condemn him for not understanding, but Bernadine’s job is incomprehensible, and his unease with it allows the audience in. America’s habit of killing its own population is one of the greatest sins of a nation built on grievous abuse, and to tackle it, a film needs a very difficult balance of gravitas and real anger. Clemency has that balance, and it’s one of the year’s most affecting films.

Written and Directed by Chinonye Chukwu