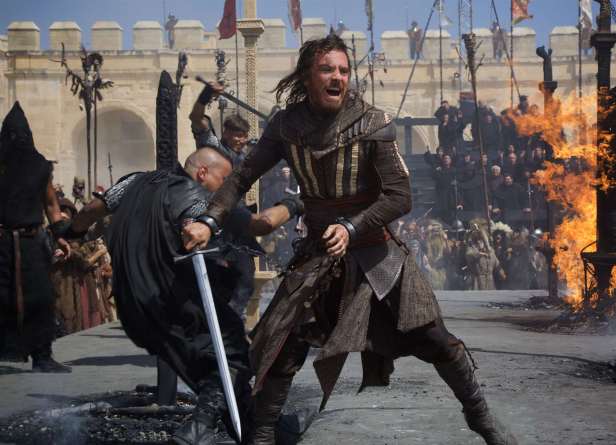 Hollywood’s relationship with videogames has always been a difficult one. Game-based films are pretty much uniformly terrible, partly due to a fundamental misunderstanding of the medium by the film industry. While movie kids still play games from the ‘80s, producers put films based on games like Uncharted or The Last of Us into motion. Given that these games are essentially already interactive movies, an adaptation seems utterly redundant. Justin Kurzel’s Assassin’s Creed manages to dodge enough of the obvious pitfalls. Taking inspiration in premise from the game series, it also tells a new story set in that world that doesn’t rely on prior knowledge of the games’ plots. It’s hardly going to be an awards contender, but it’s an improvement on its game-based predecessors.

Following Spanish assassin Aguilar and his descendant Callum Lynch (both Michael Fassbender), Assassin’s Creed has to get through a lot of the lore and sci-fi contrivances of its source material. What all this babble eventually translates as is: the Assassins Brotherhood wants freedom at any cost, while their enemies, the Templars, want order at the expense of free will itself. This conflict has been going on for centuries and has, in the modern era, been changed by the invention of the Animus, which allows Assassins to relive the memories of their ancestors while the modern Templars look on to gain historical intelligence.

Of course, it’s all very silly, and much of the film is bogged down by heavy, mumbo jumbo-filled exposition. Unfortunately, clunky dialogue extends past just the sci-fi conceits, with relationships between characters illustrated with a screaming lack of subtlety. Smarter writing flits in and out at the edges of the film – Callum’s angry bafflement at having to relive his ancestor’s memories in a mad experimental prison provides necessary levity, and Marion Cotillard gets some good authoritarian tics as Dr. Rikker – but is drowned out all too often.

Kurzel, who made last year’s truly fantastic Macbeth adaptation, has already proved that he can handle large-scale action and sweeping visuals, and the film is far more comfortable when it gets to the free-running and stabbing. Though a few fewer quick cuts would have certainly been welcome, fights and chases have a real sense of weight as Aguilar and his Assassin companion Maria (Ariane Labed) parkour and slaughter their way through the Spanish inquisition. Most action sequences are meticulously thought out and undeniably cool, whether the Spanish Assassins are escaping from execution or Callum’s fellow inmates are staging a breakout.

Though they are great on their own, these action sequences serve to highlight the weaknesses found elsewhere in the film. Clearly, genuine love and care has gone into the project, with unique touches (the Spain scenes are actually all in Spanish, which may explain why they’re not prevalent enough) and some heavyweight support. Jeremy Irons, Brendan Gleeson, Charlotte Rampling, and Michael K Williams fill out the cast, and while they provide some necessary gravitas, they’re very underserved. If there is a sequel, and the ending certainly suggests plans for a follow-up, it should benefit from an already established world, but as it stands, we’re still waiting for the first great videogame film.