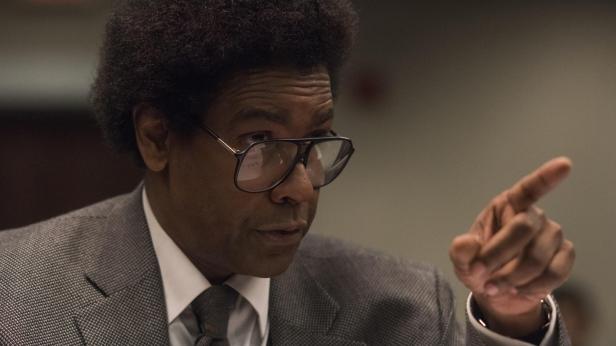 Our principles and core beliefs are never something that we should take lightly, especially not if we’re given any position of legal power. This thought guides the eponymous star of Roman J Israel Esq, but this is far from a conventional story of a heroic, downtrodden defense lawyer. Instead, Dan Gilroy, of Nightcrawler fame, deconstructs the notion of unbreakable virtue and delivers a compelling story of a man unravelled by his stubborn will to take life as a theoretical construct, instead of the vibrant, messy, and uncomfortable collection of practical demands that it truly is.

Roman J Israel (Denzel Washington) is a ferociously intelligent researcher and writer in a law firm before his partner’s sudden coma throws his life into flux. Used to working in the shadows, where his near-photographic memory was more important than his lack of social graces, he’s unceremoniously forced into an often humiliating job hunt, eventually snapped up by the high-flying George Pierce (Colin Farrell at his most vampiric). Roman is hugely resistant to being part of George’s grand, 60-person team, and his idealism combined with his unconventional personality (he’s somewhere on the autistic/Asperger’s spectrum) gets him and his clients into unnecessary troubles that haunt Roman throughout.

It’s a brilliant role for Washington, one he simply melts into, no mean feat for one of the world’s most recognisable actors. It’s his least bombastic and showy performance for a long while, which ends up being a very good thing. His increasing anxiety hums just beneath the surface of every scene, ever more infectious as Roman’s bad decisions lead him into danger and paranoia. Like he did in Nightcrawler, Gilroy draws power from an oppressive, discordant score that feels incongruous at first before silkily integrating into the mood and story. He also repeats his trick of bringing LA to breathing, bustling life in a way most movies only ever attempt with New York.

But other than those continued successes, Roman J Israel Esq is nothing like its predecessor. Instead of a taut thriller, it’s a strange morality play that excites by keeping you nervous, as either Roman himself or powers beyond his control force him into dark, mistake-filled corners. In fact, it’s more of a piece with the slower cinema of the ‘70s or prestige TV in its measured pace and rich but unfussy style. It shares this with its lead, an old guard revolutionary at least 20 years out of his time, given away not only by his clothes and technology but also by a trust in an incorruptible justice system that seems frankly naïve in 2017.

There’s a subplot with young activists, headed up by the hip and empathetic Maya (Carmen Ejogo), that’s a little superfluous and, very occasionally, rather contrived, but it does give us a chance to see Roman re-find his younger self. In a remarkably unmannered way, Washington and Gilroy give us just enough glimpses of Roman’s past for us to form his whole story without being spoonfed an overdose of information. It’s one sign among many of the film’s ferocious intelligence, and though this can come at the cost of conventional entertainment, it also makes for one of 2017’s most original thrillers.

Written and Directed by Dan Gilroy