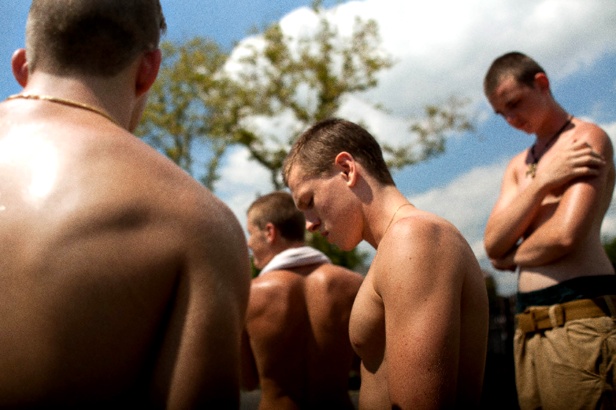 Frankie (Harris Dickinson) is a young man caught up in a storm of his emotions. He’s lying to himself, but can’t quite work out why, and ‘I don’t know what I like’ is his default answer to any remotely probing question. He’s the star of Beach Rats, the striking second film from Eliza Hittman, on the cusp of adulthood during a long, directionless summer around Coney Island, driven by well-intentioned indecision, trying his best to make sure nobody, himself especially, gets hurt. In a year with some astounding gay love stories with Moonlight, God’s Own Country, and Call Me By Your Name, Beach Rats can feel slight and over-conventional, but marks a intriguing breakout for Hittman and her hugely charismatic young star Dickinson.

Frankie spends most of his time mooching around with his drug-addled friends – Hittman capturing effectively the visceral grottiness of washing down pills first thing in the morning with a drinking fountain by the beach. He’s also trying to maintain a relationship with his new girlfriend Simone (Madeline Weinstein), and helping his mother Donna (Kate Hodge) care for his terminally ill father. But at nights he cruises gay hookup sites, searching for anonymous, sex with older men in bedrooms, motels, and even just by the roadside.

It’s not a fact that he can make public, and the poison glaze of toxic masculinity is slathered over every aspect of Frankie’s life. His dead-end friends can’t begin to fathom the idea of being gay, and Hittman doesn’t go down the easy route of having the women in Frankie’s life be any more understanding. Simone dismisses homosexuality with more than a hint of repulsion, whilst Donna associates with the lifestyle of an addict. Dickinson does a fantastic job of conveying Frankie’s torment, fear and exhaustion creeping into his eyes, the young British actor utterly convincing as a Brooklyn wastrel.

His tragic attempts to be someone he’s not are by turns moving and excruciating in their obvious hopelessness, and when he’s with the few men that he actually connects with, his giggly happiness is infectious. Yet, especially as 2017 has seen the introduction of genuine hope and joy to high-profile queer stories, Beach Rats never comes across as telling a story we haven’t seen before, and it’s a story that really starts to peter out as it approaches its end. Hittman’s straight female gaze on the film also sometimes detracts – when the men are playing energetic, shirtless sports, her camera can’t get enough of them, but it shies away from the actual sex of Frankie’s burgeoning sexuality.

Shooting on 35mm, DOP Helene Louvart makes everything look grainily gorgeous, her vision of Brooklyn and its outskirts authentically lived in, whether its grimy or glamorous. As a first film for Harris Dickinson, Beach Rats makes for a thrilling, hugely promising debut, but the rest of the film doesn’t dig deep enough to wholly convince or enthral, most of the real feeling kept at a remove from the audience.

Written and Directed by Eliza Hittman