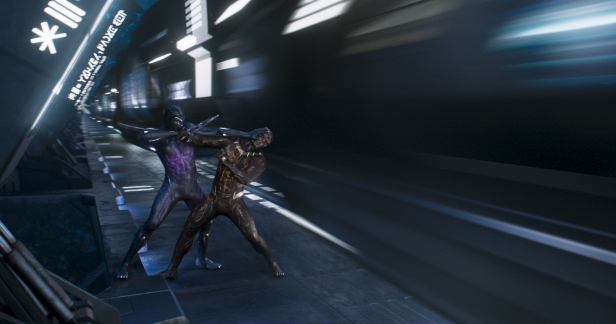 After his intimate true-story debut Fruitvale Station, director Ryan Coogler made a huge leap up in terms of scale and scope for his Rocky sequel Creed without any visible strain. With Black Panther he’s pulled off the same trick again, taking his place in the unstoppable MCU by hitting the studio’s familiar beats with plentiful style while adding a bunch of new ingredients to the mix. The result is possibly the least Marvel-y Marvel film (though all of their 2017 output could lay similar claims) that earns its status as a genuine cultural phenomenon by not only being hugely entertaining, but an important milestone in black representation in big budget cinema.

After briefly glimpsing Wakanda, home of King T’Challa, aka the Black Panther (Chadwick Boseman), in the credits scene of Captain America Civil War, Coogler’s film takes us right into the secret African nation. An isolated, Afrofuturist paradise, it’s a stunning backdrop for the story, continuing Marvel’s recent hot streak of taking us to worlds that we’ve never seen on screen with this sort of budget. As T’Challa prepares to take his murdered father’s throne, he faces opposition both at home and abroad, from arms dealer Ulysses Klaue (Andy Serkis, having a blast) to half-American, half-Wakandan revolutionary Erik Killmonger (Michael B Jordan).

Killmonger instantly joins the ranks of Marvel’s very best villains, Jordan’s brutal fury a perfect counterpart to Boseman’s measured calm. He’s absurdly charismatic, properly motivated, and, were it not for his methods, his aims could easily be that of a hero. Wakanda is a treasure mine of spectacular technology and limitless resources which Killmonger seeks to use to end black oppression worldwide. It’s a noble goal, twisted by Killmonger’s lust for violence and personal power, and one that seems to make more sense in the modern world than T’Challa’s isolationism.

It’s a thorny central struggle, and Black Panther doesn’t shy away from the intricacies of the issue. Coogler and co-writer Joe Robert Cole are happy to take on geopolitical questions that almost no other blockbuster would feel comfortable addressing, with the very first fight scene taking on Boko Haram-esque militants to free kidnapped girls. It’s satisfying to see these guys get destroyed by Black Panther and his allies, superspy Nakia (Lupita Nyong’o) and one-woman army Okoye (Danai Gurira), even though the action direction in this scene isn’t up to much. It’s murky and messy, a problem that plagues a lot of the earlier action scenes before the film settles into a rhythm.

Showdowns between T’Challa and Killmonger are fantastic when they arrive, as is a Lord of the Rings inspired pitched battle featuring multiple armies, aerial heroics, and armoured war rhinos. Nakia and Okoye (along with Okoye’s elite, all-female Dora Milaje royal bodyguards) are often front and centre in these sequences, and Black Panther enjoys easily the best female characters in the MCU. As well as the warriors, there is T’Challa’s sister Shuri (Letitia Wright), the smartest person in the most technologically advanced country on earth, who provides the king with both his gadgets and the withering putdowns he needs to stay humble.

This all makes Black Panther a shining star for representation, and the actors repay the writing with excellent performances across the board, making for likable characters who propel you past the occasional story missteps. A lot of the timeframes feel rather rushed, as do some of the relationships, suggesting a slower but more coherent two and a half hour cut exists somewhere. As it is, these problems aren’t overly evident in the moment, and the 135 minute runtime absolute zips by, but not everything stands up to scrutiny.

Like all the best Marvel films, though, these issues are never enough to detract from how fun a ride Black Panther is. An absolutely stacked ensemble cast (I haven’t even mentioned Daniel Kaluuya, Angela Bassett, Forest Whitaker, and Martin Freeman) delivers some of the MCU’s smartest non-comedic dialogue in beautiful scenery with an aesthetic entirely new to blockbuster filmmaking. The biggest franchise in the world has finally fully opened its doors to more inclusive entries. It’s been rewarded with a quality film that is certain to do astoundingly well at the box office and open up plentiful new avenues going forward.