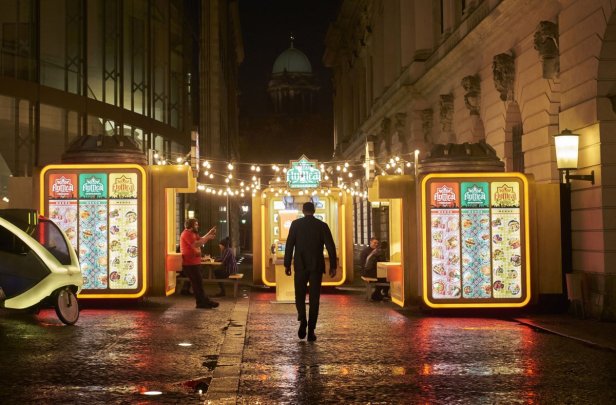 As a rain-slicked, neon-lit dystopian future noir story, Mute obviously owes a huge amount to Blade Runner, and releasing just a few months after the near-universally adored sequel 2049, comparisons are inevitable and unflattering. It really doesn’t help Mute’s case that, as a standalone piece, it’s a confusing, soulless mess. Duncan Jones has been trying to get this project off the ground for 15 years, and it’s clear that, in all that time, something got lost, and the end result (funded and distributed by Netflix) is a tragic series of horribly misjudged scenes with no coherent whole ever taking shape.

Mute’s plot ostensibly centres on Leo (Alexander Skarsgard), an Amish bartender whose vocal chords were destroyed in a boating accident, and his search through 2050s Berlin for his missing girlfriend Naadirah (Seyneb Saleh). However, this story is thrust onto the backburner constantly by a series of barely connected subplots involving the travails of two underworld surgeons, Cactus Bill (Paul Rudd) and Duck Teddington (Justin Theroux). No single story strand makes a lick of sense and Jones and co-writer Michael Robert Johnson’s script flounders desperately as it tries to tie up its loose ends. In the background, we catch glimpses of the aftermath of the finale of Jones’s fantastic debut feature, Moon (Mute is set in the same universe), which capture the attention far better than anything else on offer.

Even with a shoddy script, one might reasonably expect some inventive visuals and action, but Mute falls flat here too. Its cityscape looks generic at night and cheap in daylight, with nothing outlandish or gorgeous enough to distinguish it from any other number of pale Blade Runner imitations. Fights are slow and weightless, and one car chase is so staggeringly boring, poorly shot, and overlong that you forget about halfway through that you’re watching an action scene.

Skarsgard turns in a stolid, uninspiring performance, though there’s only so much any actor could have made out of a silent character whose only emotional setting is ‘stern but bewildered’. Rudd and Theroux attempt to inject some fun into proceedings, and occasionally succeed, but Rudd is slightly miscast as a hair-trigger ex-soldier and Theroux’s character is too thinly sketched to really compel. Their dynamic is briefly intriguing and they do have some chemistry as friends with a homoerotic undercurrent, but the script never gives them enough to do. Elsewhere, Dominic Monaghan makes a cameo in one of the most embarrassing movie scenes in recent memory.

Strikingly bad filmmaking sinks Mute on its own, but it’s worth pointing out that its politics are also pretty miserable. There’s an exploration of paedophilia that the script absolutely does not have the chops to manage, every woman is a prostitute or scantily clad cocktail waitress, and the only queer character (played by Robert Sheehan, trying his best in a nasty role) is an unrepentant, one-note shitheel with no apparent motivation. Points to Netflix for letting a sci-fi director execute a relatively expensive vision with little to no interference, but with this as the end result, one can only hope that the platform soon implements a more fundamental quality control program.

One thought on “Mute”