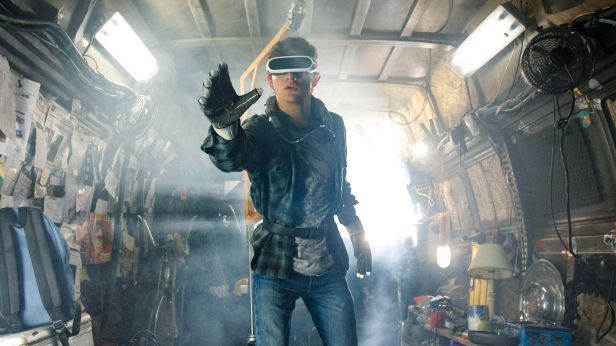 With its divisive source material, reference-focused marketing, and general embrace of the more embarrassing side of videogame culture, I went into Ready Player One with low expectations. Happily, I can report that Steven Spielberg’s adaptation of Ernest Cline’s book is actually a pleasant surprise, packed with enough typical Spielberg-ian wonder and fun that it mostly transcends its flaws as a highly entertaining VR epic. After the numbing boredom of both Tomb Raider and Pacific Rim Uprising, it’s very nice to have Spielberg back in pure fun mode, reminding us that sincere blockbusters mask their silly scripts better than winking, self-conscious ones ever could.

Taking place in both the real and virtual worlds, Ready Player One is set in 2045 Ohio, a scrappy dystopia where people live in precariously stacked trailers and the only thing worth doing is playing in the OASIS. A giant, VR, multiplayer game, the OASIS is the centre of Ready Player One’s world, so when its creator James Halliday (Mark Rylance) dies, leaving complete control of the game to whoever completes three in-game challenges, it sparks a war. On one side are the hardcore gamers like Parzival (Tye Sheridan), who seeks victory for its own sake, while corporate types like Nolan Sorrento (Ben Mendelsohn) want to turn the OASIS into a profit machine.

As might already be evident, Ready Player One has an awful lot of exposition to get through, to the point where clunky dialogue is all but an inevitability, and that’s before we reach the rebellion against evil conglomerate IOI, led by legendary gamer Artemis (Olivia Cooke). It’s all very silly, but if you let it, the story pulls you along for the ride to the point where you hardly notice the 140 minute runtime. The ’80s soundtrack really helps with this, high-energy, cheesy, and ultimately endearing. The real world stuff is rarely very good, but the OASIS itself is enticing and exciting, overpowering your more cynical reactions by simply making you wish you could play the game.

Obviously, the non-stop references have been a big part of the pre-release talk about Ready Player One, but unless you really want to play the ‘hey, I remember that’ game, they’re generally not overpowering. Some, like King Kong and the Iron Giant, are fun but hollow, but most just fade into the massive amount of background noise and CG. Easily the high point is a trip to The Shining’s Overlook Hotel, lovingly recreated and packed with atmosphere, the best use of a license in the film.

Getting all these licenses must have been a logistical nightmare, and only Spielberg could have pulled it off. More importantly, though, he’s probably also the only director who could put national treasures Mark Rylance and Simon Pegg (as Halliday’s ousted friend and business partner Ogden Morrow) in the same film, both of them adding vital humanity to proceedings. Rylance is stealthily charming in the role of Halliday, part Jobs and part Zuckerberg, adding layers of charm to what could easily have been a phoned-in performance. Everyone else, hero or villain, has pretty standard adventure movie roles, and it would be great to see Mendelsohn get back to some proper acting soon after all these sneering baddies.

With giant battle scenes and a surfeit of colour and sound, it seems odd that a movie that insists on throwing so much at the audience is actually more than the sum of its parts. The romance is weightless, as is the danger characters find themselves in, Zak Penn’s script is constantly tripping over the necessary world-building, and almost none of the jokes land. Yet Spielberg manages to wrangle all these elements into a whole more cohesive than it has any right to be and ends up as just the right kind of shallow, escapist fun that its own characters crave.